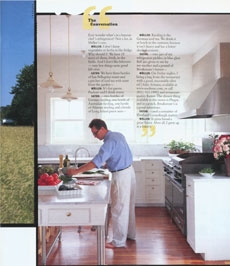 Eberhard cooking in our farmhouse kitchen

"Paulette used to go to Bergdorf's, but now she goes to meetings of the cauliflower association," says Eberhard Müller, the executive chef and part owner of Lutèce, the formidable Manhattan restaurant, as he holds forth in the kitchen of the nouvelle farmhouse he and his wife, Paulette Satur, built two years ago on 20 green acres on the North Fork of Long Island.

Hands dancing on food like some kind of culinary Nureyev, Müller prepares lunch: cubed tuna tartar (with fresh herbs from the farm) for starters, followed by grilled bass, corn stew and tomatoes. Before the Müllers married on Christmas Day 1996, Müller asked Satur, whom he met one evening when she was dining at Lutèce, "What do you want to do when you grow up?" Although Satur made her living as an accountant representative for a Long Island wine importer, she grew up on a dairy farm in central Pennsylvania and has a master's degree in plant physiology from University of Arizona. So, of course she answered that she would love to own a farm and grow produce. "It made perfect sense to me," Müller says. "Lutèce needed fresh produce."

The couple found the farm the day after they became engaged in the fall of 1996. More than 18 acres are now planted with organic fruit, spices, assorted vegetables, lettuce and some 35 varieties of tomatoes. Not only does Satur Farms provide fresh produce for Lutèce, it also supplies Le Cirque 2000, Fressen and some 50 other restaurants in Manhattan and on the East End of Long Island. All in all, the Müllers ship 3,000 pounds of organic lettuce a week to restaurants and stores in New York. "New York City," Müller reports, "consumes 30,000 pounds of lettuce every day."

Müller takes a Samurai-size stainless-steel knife to the tuna on the chopping block. He dices without looking down. "The entire experience of growing my own produce has dramatically changed my style of cooking at home, and at Lutèce," he says. "I used to think I was using fresh ingredients, but I wasn't. Lutèce has become incredibly more seasonal. Just because it is the first day of spring, we do not change the menu and have spring pea soup. Farmers plant their peas by St. Patrick's Day. Ever see peas grow in three days? Now wait until I have local spring peas to make pea soup. I go out in the farm and see what's ripe. Then I decide what I'm cooking."
This year, when the strawberries were first in bloom, Müller went looking for the "perfect berry" in fields hidden from view from the house by tall rye grass. He walked for over an hour, "one of the most delightful things I've ever done," he says, although his wife couldn't find him and, "Green Acres" 2000 style, tracked him down on his cell phone.
"Where are you, darling?"
"In the strawberry fields, dear."

Paulette Satur returns this morning from a neighbor's place with an armful of roses the size of cabbages. "Roses like these need pesticides, and I won't grow them because we're organic," she explains, filling a vase with tap water.

The inspiration for their house itself jelled one day while the Müllers were reading Vogue and happened upon a story about a home designed by the architect Annabelle Selldorf. They contacted her cold to discuss the farm.

"We started thinking about the house first with the kitchen," Müller recalls. "How does the dining room table become and extension of the kitchen?" For the master chef, the kitchen needed to be designed so that people could visit him there but also so no one would get underfoot when he cooked. A part of the solution is keeping his stove near the refrigerator so that he could move between them with ease. "There's nothing out of the ordinary here," he says. "Nothing anyone can't have. We designed an entertainment kitchen. I knew we'd have a lot of dinners and parties and that I'd always be the one in the kitchen cooking. At mealtime, we put the hors d'oeuvres on the chopping block on the center island, with the silver and the plates stacked. Everyone gathers around the island for wine and to talk before we eat. We serve buffet style."

The kitchen plan is quite simple. No secrets here: gadgets are kept to a minimum. If there was a microwave oven, I missed it. There are two Akso dish washers near the sink, a Garland oven and a Traulsen refrigerator. The electric coffee maker is made by Starbucks. "Chefs hate cabinet doors," says Müller, who devised the idea of curtains over the cupboards instead. "The idea was that I could pull a rope and everything would be at my disposal." Alas, the fabric doesn't curl as tidily as he would like. "Something messed up in the translation," he admits and laughs. "We're debating with the architect. I want something different. She thinks it looks neat."

Like a debutante's ransom of Tiffany rubies, the tuna is very "tartar" now, ready for presentation and consumption. Müller chops some cilantro to doll up the dish. "Cilantro is a bit overexposed, no? The cappuccino of the vegetable world." Dusting the fish with herbs, he pauses: "Like everything in life, people tend to overdo. The idea of cooking is to bring out flavor, not put it in your face. Food, like life, is all about balance. Acidity and sugar- the savory with spice."